How to use Handshake and Skynet together through the Namebase API

Sia and Namebase teams have partnered together for the "Own the Internet" Hackathon — a 3-week hackathon from July 29th to Aug 19th to build decentralized applications that are censorship-resistant and truly in your control. There are more than $4000 SC and HNS in prizes, and every participant gets a free Handshake domain and an Own the Internet T-shirt! Registration is open until the end of the hackathon so start hacking now!

You can access the code in the following blog through this Github Gist.

Do note you can still use the GUI DNS management in your Domain Manager if you don't want to use the API.

To authenticate your API calls, you'll need to create an authentication header to send with the HTTP request. Here's what the steps look like in javascript:

Here's a script that simplifies the HTTP requests into a command line interface. To set it up, set the "ACCESS_KEY" and "SECRET_KEY" with the keys you recorded earlier. The full documentation on the API can be found here. 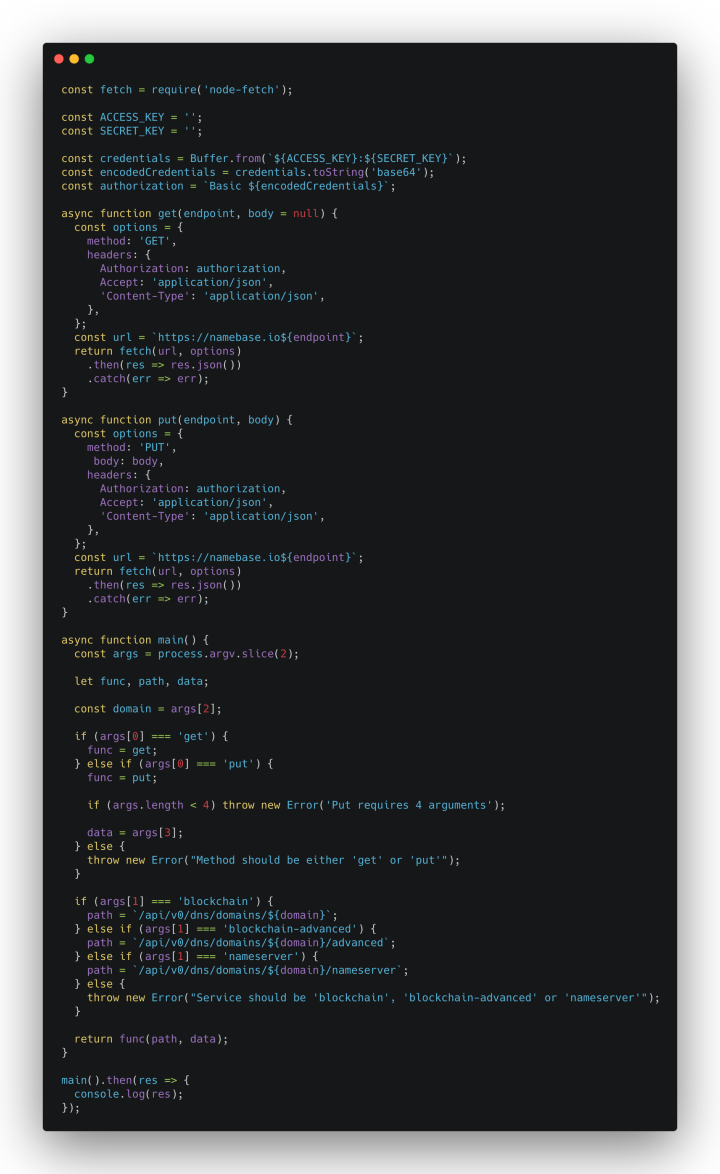 Now that your API calls are authenticated, you can test out the queries. The script call looks like:

"SERVICE" = which DNS settings you want to add, the three options are:

"RECORD_DATA" = only necessary for "METHOD"='put'; the json format varies slightly based on the "SERVICE", be sure to double check with the full documentation.

The nameserver records are slightly different. It will only replace records if a record with the same type and host is specified. For example, if I have a "TXT" record set on "foo.example", adding another "TXT" record on "bar.example" will not replace it.

Now that you know the details of the API, let's run through some examples.

This calls the "GET /api/v0/dns/domains/YOUR_DOMAIN" endpoint.

If your response contains the following json in the "records" array, then the nameserver is connected:

If it's not, run the following command to set the record:

This calls the "PUT /api/v0/dns/domains/YOUR_DOMAIN" endpoint.

You'll have to wait until the update gets mined before it's ready to use. If you're not sure, run the command to retrieve the Handshake records again. The "upToDate" value will indicate if Handshake has updated.

For an extended tutorial on setting up a site hosted on Sia's Skynet and connecting it to Handshake via their Skynet Portal, their Skynet 🤝 Handshake blog post is extremely helpful. Ivaylo explains how to send your content to the decentralized cloud and how to set your Handshake DNS records through Namebase's UI in order to access your content through the portal. The following is how you would set those records through the Namebase API.

For setting up the Skynet Portal, all you'll need is to set a "TXT" record with the skylink for your app. Here's what the call should look like:

Delete all "TXT" records on "foo.example"

Nivk Ulven
Software Engineer | @NamebaseHQ
Nick is an MIT student studying computer science and economics. Prior to starting at Namebase, he has worked on blockchain consensus research with MIT's Digital Currency Initiative and later became an AI researcher at MIT CSAIL. Nick's mission is to use blockchain technology to make the world more secure and reliable.
Subscribe for the latest