You can make a difference

It only takes 1000 true believers to change the world. You can make a difference by joining the community and inviting one friend.

We recently shared Namebase’s vision, mission, and strategy, which articulated what Namebase is about and why we exist. In a similar vein, I would like to share my personal story about why I care about Namebase and started working on it in the first place.

In college I got to travel to Turkey before my second semester. My Turkish roommate Azer had just gotten married and I wanted to visit his home country before he settled down with his wife in Berlin. I expected to experience culture shock, but living with Azer prepared me for Middle Eastern culture so I felt at home with everyone I met. What I wasn’t prepared for, however, was the censorship in Turkey.

I grew up in the United States, so this was my first experience with internet censorship ever. I grew up using YouTube to learn how to program, Twitter to stay on top of worldwide events, and Wikipedia to dive deeper into subjects I didn’t know about. It was shocking to realize that every Turkish citizen was prevented from accessing these critical websites that I relied on every day. This felt deeply wrong because I grew up with Internet freedom as a given, but to be honest my concern eventually became indifference. Despite my gut reaction, I didn’t have a clear understanding of why internet censorship was necessarily bad and I also didn’t think it was something that would affect me in the US.

I’m not especially proud to share that when I went home I was able to carry on with my normal life without worrying about what I experienced — I just didn’t care. However, the past two years since then have forced me to care. Issues around freedom and safety on the internet continue to happen. In fact, the issues have increased in frequency and magnitude and they’re affecting every country, including the US. It’s gotten to the point that I can no longer ignore what’s happening because the Internet is at risk. These issues are becoming important enough that no one in the world can ignore them — if the trends continue then you, your brothers, your sisters, your parents, and your children will live in a world that’s worse off than what we have today.

Your freedom and safety is at risk

Every country in the world is increasing the control it has over the information people consume and produce. Some are doing it faster than others, but all are moving in the same direction. China blocks Reddit, BBC, The New York Times, DuckDuckGo, and hundreds of other websites. Iran has repeatedly prevented access to social media tools like Facebook, Twitter, and Telegram in addition to completely shutting off the Internet in 2019. India is censoring dozens of regions as people protest the Citizenship Amendment Act which marginalizes Muslims. Even developed countries like South Korea have increased their control over the Internet and media since 2018, particularly media critical of the government. In South America, Brazilian prosecutors are taking legal action to remove critical social media posts and online news articles, including the recent cybercrime charge against American journalist Glenn Greenwald. 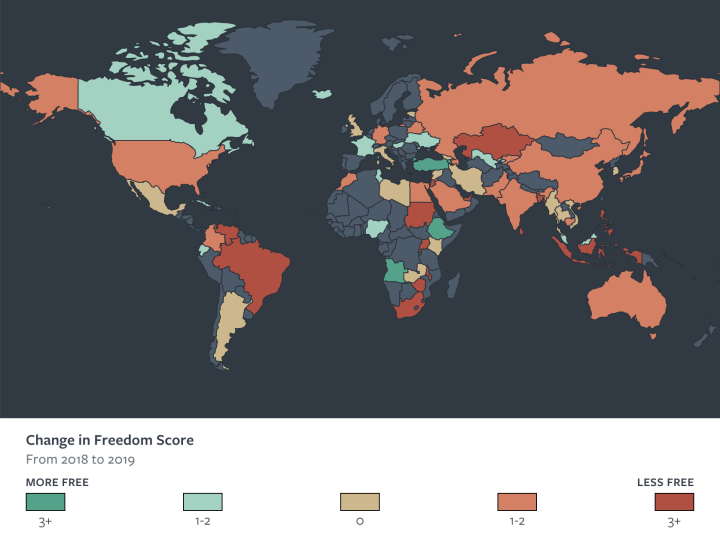 Internet freedoms in 33 countries have been on the decline. Source: freedomonthenet.org

The actors involved in hurting freedom and safety on the Internet are not limited to governments. Organizations at the top of the Internet hierarchy fail to protect our security and abuse their control for profit. Certificate Authorities, which enable secure communications on the Internet via HTTPS, have weak security practices and are regularly compromised — the system as a whole is broken.

ICANN, the organization in charge of governing the Domain Name System (DNS), recently removed price caps on .COM and .ORG domains even though it was universally opposed. To make matters worse, ICANN tried to sell .ORG to a private equity firm affiliated with ICANN’s ex-CEO. This is textbook regulatory capture.

ICANN has yet to stop the sale of .ORG despite significant public protest.

The Internet we trust

The Internet is critical infrastructure that the entire world relies on. Governments are abusing it as political tools to control their citizens, and organizations that are supposed to protect us are exploiting it for profit.

The Internet is critical infrastructure that the entire world relies on.

You may think that you do not live in a country affected by these issues now, but you likely do, and things will only get worse. The trend shows that 10 years from now it will be harder and more expensive to have our voices heard safely than it is today. I do not want to live in that world — there is a reason that slaves worldwide were forbidden from learning to read and write. It’s the same reason that Iran shut down social media tools like Telegram and Twitter. The same reason why India is censoring the Internet around the country. Deng Xiaoping, the former leader of China, once created a Democracy Wall which allowed people to anonymously voice their political opinions publicly. The Democracy Wall was quickly removed within a year after posts critical of the government gained too much popularity. If the Democracy Wall existed today in digital form, Chinese citizens may have been able to prevent the government from imprisoning three million Uyghurs in concentration camps. 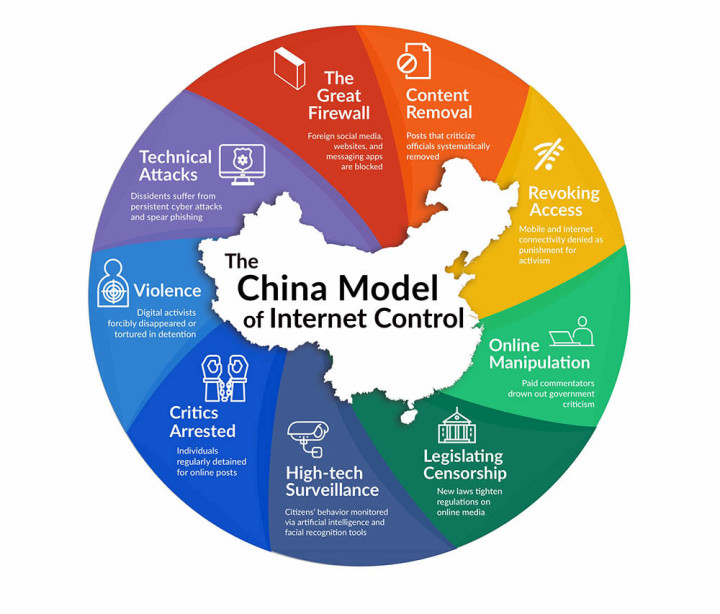 China’s model of the Internet that it is exporting to the rest of the world. Source: freedomonthenet.org

This is a human rights issue that affects billions of people, and increasingly everyone in the world. Bill Clinton once quipped that trying to control the Internet is like “nailing jello to a wall,” but after the last two decades, China’s Great Firewall has become incredibly effective at controlling the Internet. Now other countries are following in China’s footsteps —Chinese officials have already held training seminars on information control with representatives from 36 countries. Even if you are not directly affected, the second order effects are catastrophic. When governments control the narrative their citizens consume, countries become hive minds and lose touch with the rest of the world — governments know that it’s easier to do terrible things to people who don’t have a voice. The stakes are higher than ever as geopolitical tensions rise (not least between the US and Iran).

You can make a difference

We have the opportunity to change this trend. The Internet is changing — governments are becoming more tech-savvy and are increasing their control over Internet companies — but it’s still not certain what the Internet of tomorrow will look like. I met the Handshake team in 2018 and learned how Handshake makes DNS more secure, censorship-resistant, seizure-resistant, truly-owned, and private. It was then that I decided to build Namebase, which is basically infrastructure to support Handshake adoption. I didn’t think I could do anything to protect the Internet when I first encountered censorship in Turkey. Even as I watched the trajectory of freedom and safety on the Internet take a nosedive, I still didn’t do anything because there was no feasible way to change the system. Now I know that there is a path forward because Handshake can flip the authoritarian model of traditional DNS on its head.

If you’re reading this, you’re orders of magnitude closer to the future than the rest of the world. You can make a difference now by spreading Handshake to the rest of the world — your family, friends, and community. You can make a difference. Change is brought to the world not by the indifferent majority, but by a small, intolerant minority of people who care strongly about an issue. The transition from HTTP to HTTPS is a great example of this. The general public doesn’t care about using HTTPS over HTTP or even know what it is. Yet a small group of people cared enough about secure communication on the Internet that they pushed the world towards using HTTPS everywhere. We can do the same with Handshake — the majority doesn’t need to care about Handshake or even know about it for us to spread its benefits to the rest of the world.

Today there are a number of organizations, investors, and developers who support Handshake. We can change the world by growing the number of advocates outside of this group. Right now there are less than five community members who I consider strong advocates for Handshake. If we get to 10 advocates, then 100 is plausible. If we get to 100, then 1000 is likely. If we get to 1000, then we will have an incredibly powerful community that can change the world. We will have enough momentum and influence to create an Internet that is censorship resistant, seizure resistant, privacy preserving, secure, affordable, and with true ownership that’s free from rent seekers.

Usually you need to choose between a good cause or an economic opportunity. Fighting climate change isn’t profitable, that’s why it’s so difficult. Crypto offers an alternative. The beauty of Bitcoin is that the earliest evangelists were rewarded with more wealth than they ever could have achieved otherwise — Bitcoin was the best investment of the decade. Handshake presents the same opportunity. Handshake domains are digital real estate. The more they spread, the more people have access to the new free Internet, the more valuable Handshake domains become.

You can make a difference now, before freedom and safety is destroyed on the Internet for good. Join our community, and invite one friend, family member, or acquaintance. That’s all you need to do to make a difference — we’ll help you take it from there.

Tieshun Roquerre
CEO at Namebase | @TieshunR
Tieshun is a Thiel Fellow who studied Math and Computer Science at MIT before starting Namebase. Previously at the age of 16 he became a fullstack engineer at Teespring, and at the age of 17 he founded StrongIntro which was funded by Y Combinator and Greg Brockman (founder of OpenAI). Tieshun's mission is to improve the security of the Internet by giving an unstoppable name to everyone in the world.
Subscribe for the latest