January was a whirlwind. Between Trump's social ban, Parler's deplatforming across multiple internet service providers, WhatsApp's exodus to Signal, GME's trading halt, and the WallStreetBets Discord ban, the need for decentralization has never been stronger. As a result, we’ve again seen stronger growth in the community this month than any other.

These are the Handshake highlights from January.

As we mentioned, we're seeing huge growth in the community, likely in direct response to these current events. To start, more and more Namers are using their names with the total number of unique Handshake names in use seeing 20% growth MoM. 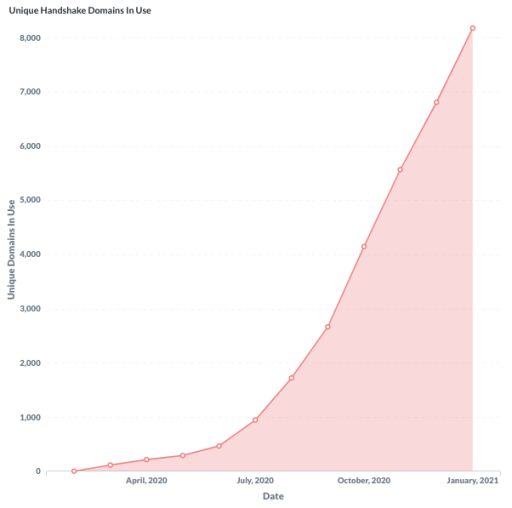 Something that I'm particularly excited about is that understanding around the potential use cases for Handshake names is beginning to solidify. I believe this provides one of the most significant opportunities for us to continue to exponentially grow the Handshake ecosystem.

As more and more members join a community with a clear understanding of the potential for the technology they’re supporting, and align on a narrative of how to get there, the flywheel will only continue to spin faster.

All the while, as larger and larger names join the community - like Netherlands rapper Lange Frans - community members stand ready to welcome the new wave of Handshake enthusiasts that will inevitably follow! (Special shout-out to hnsbroker/ for reaching out and gifting him the name.)

Public media presence is also growing. Handshake received a shoutout on CNBC from Kindred Ventures’ Kanyi Maqubela (start at the 3:11 mark), and Namebase’s organic reach is continuing to expand as Tieshun appeared on the Crypto Current podcast with even more podcasts episodes on the way. Have a read/listen to get caught up on the current state of Namebase and Handshake!

And there’s been a number of community updates! A Namer Community member created an entry for Handshake on Wikipedia's Alternative DNS root page and it was approved! Handshake’s international presence is also growing as evidenced by the incredible Mr. Woshou and his high energy Youtube channel dedicated to Handshake.

January was an incredible start to the year. While there were many surprises, there were also continuations of trends we’ve known have been underway for some time now. We thank you for joining us on this journey, and look forward to what the rest of the year has in store.