We recently received a number of questions related to Handshake auctions and bidding. So we developed this tutorial to help you understand the ins and outs of bidding on Namebase.

A Vickrey auction is a type of sealed-bid auction. Bidders submit their bids without knowing the bid of the other people in the auction. The highest bidder wins but the price paid is the second-highest bid. This is really important to understand. For example, if you bid 10 HNS for nakamoto/ and someone else bids 5 HNS, you’d win the auction and only pay 5 HNS for nakamoto/. This means that you don’t spend more HNS than you need to when you win an auction.

How does the auction work?

Handshake names are released sequentially each week according to their hash for one year after launch. You can place a bid with Handshake coins (HNS) anytime after a top-level domain is released.

Your lockup is made up of = your bid + blind (optional).

So the bid you first place is the maximum you’ll pay if you win the auction, though in practice you’ll pay less than your bid because it's a second price Vickrey auction (you pay the second highest bid price).

Another way to look at it is if you want to bid 10 HNS for a name you truly want, but are concerned about potential competitors, you could add a 20 HNS blind. This lockup of 30 HNS (10 HNS bid + 20 HNS blind) would be publicly visible. If you win, you still wouldn't pay more than your bid of 10 HNS. The other 20 HNS would be returned to you.

What happens when you win/lose?

If you lose, your funds are returned in full (minus the Handshake Mining Fee) after the reveal period ends. If you win, congrats! You're now one of the first owners of decentralized top-level domains on the internet.

What happens when you "Watch"?

Namebase will email you when top-level domains you watch are released for bidding. This is useful because names are released over the course of the year, so if you find a name you want to bid on you can watch it through Namebase instead of setting a reminder manually to check back in later.

Now that you know how ‘auctions’ on Namebase work, let’s get into how ‘bidding works’

Because these are Vickrey auctions and the amount you lockup is publicly visible, an optional blind can be used to mask your actual bid. Regardless of whether your win or lose the auction, the blind will be returned to you.

The bling is basically obfuscating your real bid. For e.g. say you bid 1HNS, with a blind of 1000 HNS. Your bid appears as 1001 HNS but it is actually 1. This is to prevent someone from griefing your bid higher and higher. The blind hides your real intended bid. 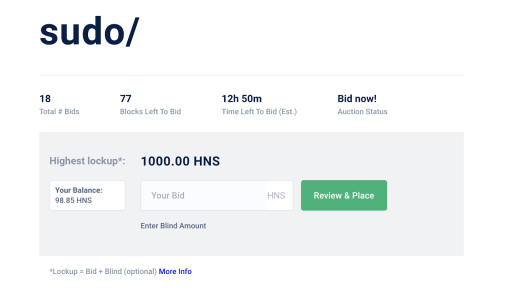 After you've bid, you can't update it. This means you should bid the maximum you're willing to pay for a domain. You can also see the masked bid/lockup of other bidders, but this doesn't tell you what their actual bids are.

What's the miner fee I see when I try to bid?

Miners ensure the integrity of the Handshake network. Every transaction (like bidding) they validate involves a small fee paid to them in HNS. 100% of the fee is paid to the miners. Miners are independent parties who are not associated with Namebase. At the current price of HNS, mining fees for each auction amount to a few cents at max.

Technically yes. However you must have a blind greater than 0 if your bid amount is 0.

When will I receive my lockup back?

Can I follow an auction even if I haven't bid yet?

Yup! Just add it to your watchlist.

Hope you found this tutorial useful. If you have any questions, please reach out to us via live chat in the product or on Twitter @namebaseHQ